Laurence Boyce  is a freelance journalist (specialising in cinema, books, music and culture in general) as well working as a cinema/festival programmer and in film PR. 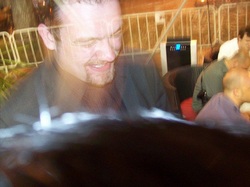 Born in Leeds, he graduated with a BA in Film & Literature from the University of Warwick and worked for the Leeds International Film Festival for many years where he worked as a programmer (including the short films and UK section) and moderator.

Laurence moved on to be the director of GLIMMER: The Hull International Short Film Festival. He currently works at the Black Nights Film Festival in Tallinn where he works as a programmer and moderator. He also advises on PR and programming at numerous film festivals and cinemas.

He is the programme director of Sleepwalkers Short Film Festival in Tallinn, Estonia as well as returning to being programmer for the Academy Award qualifying shorts section of the Leeds International Film Festival.

Laurence is also an award-winning regular contributor to the likes of Screen International, The Guardian, Variety, Little White Lies, Moviescope, Dazed and Confused, ERR (Estonian Public Broadcasting), International Film Guide, The Baltic Times, The Culture Vulture, Eesti Ekspress, MovieMail, La Strada Kinoleht, The Sabotage Times and many others. He is the Baltic Correspondent for Cineuropa as well as the editor of Cineuropa Shorts.  He has also written for books such as the Directory of World Cinema (British and American Independent) published by Intellect.